You know that here at Freelancer News we love to introduce anything that will make a Freelancers life easier!

We think you need the Invoicing App Albert in your life, so we spoke to founders Dan and Ivo to get the full low down –  read on!

With over 600 5-star App Store ratings, meet the UK’s Highest Rated Finance app for Freelancers. Gone are the days that freelance finance apps are difficult to use. Welcome to a new age where they’re actually designed to help freelancers.

Tell us a bit about Albert and who it’s for!

Albert is the best app freelancers hardly need to use. What I mean by that is, by bringing together invoicing and expensing in a totally new and incredibly simple experience, using the app takes almost no effort.

It’s currently being used by approximately 25,000 freelancers from all kinds of trades and industries, including all types of creative practitioners, tradesmen, managers, cleaners, cocktail makers, hairdressers and many, many more.

From the founders Dan and Ivo’s personal experiences as freelancers, “you want to give all your attention to your work and clients, but you also spend so much time worrying about money”. Albert takes this fear away, by being a financial buddy that’s actually smart about the little, but often annoyingly important things.

It tracks your invoices and revenue for you, notifies you of important events such as your invoice bouncing your client’s inbox or when they’ve received and read it; and it has a 1-tap sharing feature which generates a report and exports all your invoice files at the simple tap of a button.

What was the inspiration behind creating an invoicing app?

Having previously worked side by side when building the RBS and Natwest mobile banking apps, co-founders Dan and Ivo’s frustration as freelancers lead them towards the creation of Albert. Travelling for work between L.A and London, they soon realised that there was no easy way to do their freelance finances, and to monitor them all from one handy place – their mobile.

One fateful 11-hour flight was just about enough time to build a prototype for how they thought it should work. They showed it to a bunch of freelancer friends who were asking for it the very next day. That plane turned out to be the birthplace for Albert.

What’s the meaning behind the name? 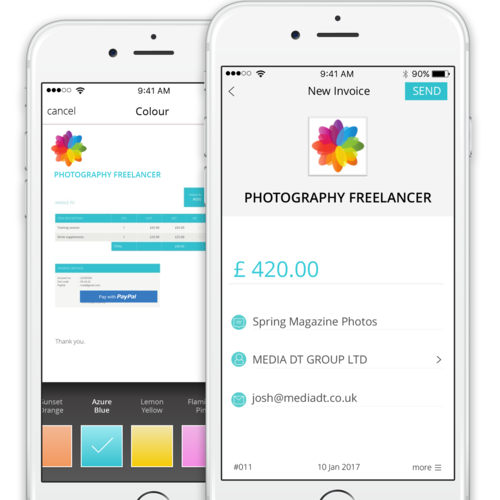 Managing finances can often feel alienating, and financial advisors can sometimes feel like they come from a different planet. The purpose behind a name like ‘Albert’ is to show the freelance world that finances can be human and approachable, by speaking their language.

Since the company was founded by freelancers, what are the best things about being a freelancer?

“Independence to shine”. Freelancers are often extremely talented people who like their freedom but also feel a high sense of responsibility for delivering the best quality work to their clients – after all, their work is a representation of themselves. A combination of independence whilst doing what you’re best at, can make for a brilliant lifestyle I’m sure many freelancers would agree.

What are the worst?

Well, you can probably guess it by now…the financial management side of it. It’s pretty crazy how most people still feel uncomfortable or have trouble dealing with it. It’s such a basic aspect of one’s life that it should be made easy!

What do you have planned for the future of Albert?

We’re revolutionising the way freelancers approach their invoicing and financial admin, so, let’s just say that soon, freelance finances will never be the same again. This autumn, Albert will be announcing something awesome – so watch this space!

Exclusively just for Freelancer News readers, we’ve created a VIP list for you all to be the first to know about these new, exciting plans.

So if you’re interested, quickly leave your email address here https://getalbert.com/neverthesameagain and you’ll hear from us soon! And no you don’t have to worry – we promise we won’t spam you 😉