Back in October 2014 I wrote about Montreal based trend forecasting group “Logomachy” and their 34 page manifesto “Mass Digital Nomadism: Unlocking New Options for the Information Age”, which outlines the benefits to freelancers of giving up traditional homes in favour of smaller mobile options.

However I’ve spent a lot of time pondering this idea since my initial post, and the same question keeps running through my head: “Sounds great … But what about continuous power generation?” To be truly mobile and still have your tech active, you’d have to rely on renewables. And sometimes it’s not sunny…

But then Lockheed Martin made what might turn out to be the single most important announcement of the decade: “Sustainable nuclear fusion is within our grasp.” Just picture a power source that uses water for fuel with no harmful by-products or air pollution. Then picture it being small enough to fit inside something like the F-22 or on the back of truck. And to top it all off, this unicorn of a device will have a working prototype in 5 years, with commercial operations inside of 10.

It’s the stuff of dreams, right? But what if I told you the reason I mentioned the F-22 was that Lockheed Martin is now claiming to have figured out how to build a working unicorn, otherwise known as a nuclear fusion reactor? To make things even more exciting, the announcement came from the “Skunk Works”, who are responsible for many of the more extreme Lockheed Martin designs (SR-71) and bear a crown marked “ Doing the impossible, quickly. ”

It’s ground breaking to say the least. In typical Skunk Works fashion, the compact reactor design is fundamentally different than anything that’s come before. In terms of fusion reactor design, most people (including the investor) have been following the Soviet era “Tokamak” design philosophy that bigger is better. To give you the idea of just how different a design path Skunk Works has taken, this is the Tokamak design currently being built by the International Thermonuclear Experimental Reactor (ITER) team: 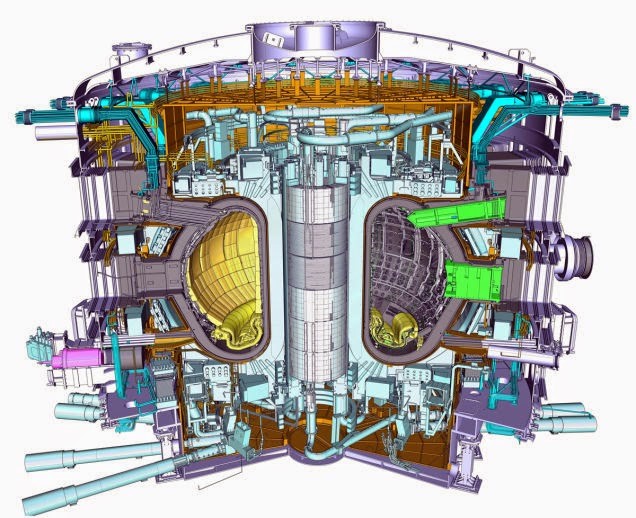 This is the old-style Soviet Tokamak scheme of the International Thermonuclear Experimental Reactor; a hulking ’powerstation-sized’ system being constructed in France.

And in comparison, here is the ’truck-sized’ compact fusion reactor (CFR) design being worked on by the Skunk Works team: 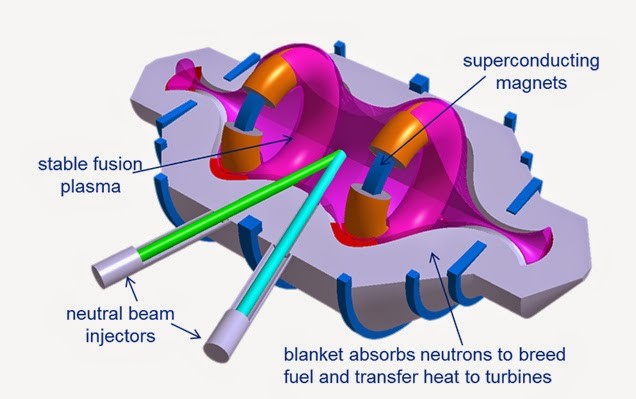 This isn’t a difference in 3D model rendering quality. The CFR is a far smaller and (and arguably more importantly) far simpler design, earning it the nickname ‘Star in a Jar’.It’s perfectly suited for the rapid prototyping Skunk Works is known for. According to Dr Thomas McGuire, the leader of Skunk Work’s Revolutionary Technology section:

“The traditional Tokamak designs can only hold so much plasma, and we call that the beta limit. Their plasma ratio is 5% or so of the confining pressure. We should be able to go to 100% or beyond.”

This brings me back to the whole concept of the mobile tech focused freelancer. If the CFR really will be that small, the mass digital focused exodus from the almighty (electrical) Grid outlined in Logomachy’s manifesto would be more than possible; it would become inevitable. Why would you stay in one place when you could literally work or live anywhere you could park? The knock on effect to city populations could be massive. Can you picture Chicago’s Logan Square or Wicker Park without all the hipsters?

But jokes aside, this could represent a paradigm shift within our (freelancers’) own ongoing paradigm shift of the work force. The effect of being able to hire people for any task or job on demand has been huge. But what happens when those people could actually be on site within a day or so?

Wolf Vanberg is so hipster, he liked Mr Fusion before it was all cool and epoch changing.